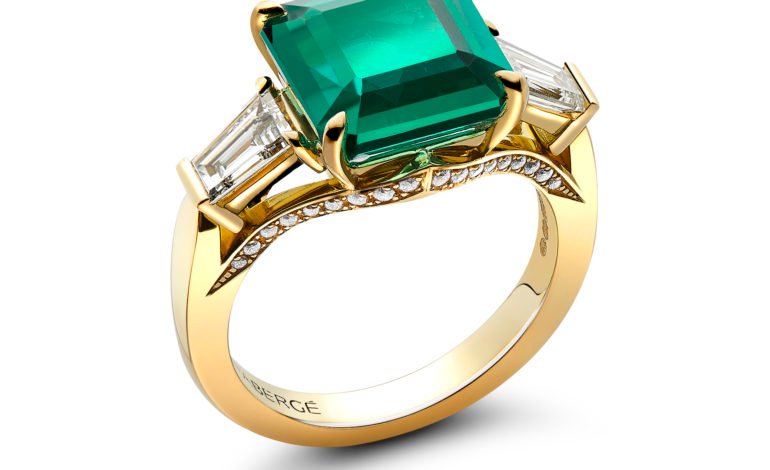 Emeralds have always had an opulent allure and an aura of healing about them. Twenty times more rare than colourless diamonds, they were first discovered some 5,000 years ago. In that time, they have been credited with everything from curing snakebites to easing childbirth, divining truth and seeing the future. Emeralds are believed to symbolise hope, growth and fresh starts – particularly apt in the challenging days we currently face.

Fittingly, emeralds are the birthstone for May, that freshest and most verdant of months, when thawed land springs into new life and buds with flower. Joanna Hardy, a fine jewellery specialist and author of the book Emerald, sums up the special connection between these precious green gems and this time of year: “Once again, our parklands, woodlands and gardens are bursting with renewed life; there is nothing quite like the haze of green as new leaves burst forth. The green colours of spring remind us of hope, rebirth, renewal and

nature, and it is no coincidence that emeralds have always been associated with these calming and rejuvenating properties. Wearing an emerald connects us with the earth, reminding us that there is hope in the air.”

And after what has been a particularly challenging start to 2020, it is fair to assume that the green shoots of spring will be more welcome than ever this year, and so too the gemstones that so perfectly encapsulate the spirit of this season as thoughts turn to jewellery, and the increasing popularity of birthstone gifting (a top trend currently with engagement rings). Those born in May are lucky indeed. One of the ‘big three’ precious gemstones – alongside rubies and sapphires – emeralds belong to the mineral family beryl and range in colour from a bluish green to a pure green, with vivid colour saturation, the shade varying with the country of origin.

East African emeralds are amongst the oldest of all, deriving their intense colour from a rare combination of minerals. The world’s leading supplier of responsibly sourced coloured gemstones, Gemfields has been mining emeralds at its Kagem mine in Zambia since acquiring the mine in 2008 in partnership with the Zambian government. Zambian emeralds are believed to be over 500 million years old and, due to their high iron content, more robust than others. They are known for their rich colour and are some of the largest and most exceptional emeralds found anywhere in the world. The ‘Lion Emerald’, discovered by Gemfields at Kagem in 2018, is, at 5,655 carats, one of very few exceptional gemstones to have merited its own name, displaying rare colour and clarity characteristics in addition to its significant weight.

As well as their exquisite physical characteristics, the talismanic properties that have long been associated with emeralds are a large factor in their enduring popularity. Romans believed they could revitalise the soul of those who wore them; early Christians believed they symbolised the resurrection of Christ; Cleopatra – after whom early Egyptian emerald mines were named – used to present them to subjects as talismans; the ancient Egyptians viewed emeralds as sacred, and ancient civilisations in general valued them for their healing properties far more than for their material value. In 1609, a Belgian physician suggested they could cure everything from dysentery, fever and bleeding to epilepsy and panic. Since these times, a rooted belief in an almost otherworldly ability to heal has attached to these beguiling gemstones. Who can forget the cherished emerald and diamond tiara that Prince Albert had made for Queen Victoria, or the ones given to Elizabeth Taylor by Richard Burton, subsequently auctioned at Christie’s?

When shopping for emeralds, Joanna Hardy suggests looking for, above all, transparency on origins and treatments; each emerald of note should come with a report from a recognised gemmological laboratory. You

should also look for evenness of colour and good saturation; the cut matters too, and it is important to remember that natural inclusions are part of the gem’s DNA and should be welcomed: these are what makes each and every emerald unique.