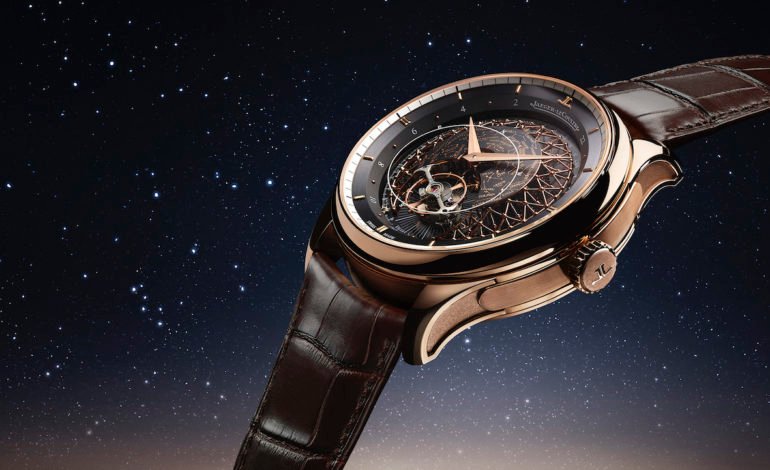 The Master Grande Tradition series epitomises Jaeger-LeCoultre’s horological ingenuity and artistic creativity, bringing innovations and complications together in fascinating new ways. As the latest addition to this series, the new Master Grande Tradition Grande Complication harnesses more than a century and a half of accumulated expertise. This masterpiece of mechanical engineering incorporates two of the most romantic yet technically challenging complications in horology – a minute repeater and a celestial vault. The complex mechanism is further elevated by an orbital flying tourbillon. This limited edition of eight pieces each in rose gold and in white gold features a new aesthetic that reaffirms Jaeger-LeCoultre’s mastery of the artistic crafts.

A MINUTE REPEATER FOR THE MODERN AGE

Considered by watchmakers to be the most challenging – and rewarding – of all horological complications to master, a minute repeater is not only a timepiece but also a miniaturised musical instrument. The technical difficulty of creating one lies in the complexity of the mechanism needed to transcribe the precise time shown by the hands into a series of perfectly programmed strikes. The artistic challenge lies in ensuring that those strikes produce a sound that is rich, harmonious, pure and clearly audible.

Over the past 150 years, minute repeaters have had a major presence in Jaeger-LeCoultre’s portfolio of complicated timepieces. La Grande Maison’s mastery of chiming watches is confirmed by more than 200 calibres, including some 100 minute repeaters made before the year 1900. Since the mid-1990s, when Jaeger-LeCoultre revived this noble horological legacy, its engineers and designers have worked to redefine the benchmark for acoustic quality, harnessing technology to serve and safeguard horology’s most treasured traditions.

One of the most important elements of a chiming watch is the way in which sound is transmitted from within the watch to be heard by the human ear. Capitalising on the superior acoustic qualities of synthetic sapphire crystal, Jaeger-leCoultre’s patented ‘crystal gongs’ (introduced in 2005) are soldered directly to the sapphire crystal, which acts as an amplifier. The square-profile gongs introduced two years later provide a flat striking surface for the hammers, ensuring more consistent and powerful strikes, while the additional material provides a greater vibrational mass and thus a fuller sound. The articulated trebuchet hammers (introduced in 2009) use a similar mechanical principle to the medieval counterweight catapults that they are named after, greatly improving the speed and force of the hammer strike.

Even the most beautiful chime can be marred by background noise – a problem that Jaeger-LeCoultre resolved 125 years ago, with its patented silent strike governor. Using centrifugal forces to regulate chiming, it eliminates the background buzz characteristic of older striking mechanisms. Recognised as a benchmark, it is now used in almost all chiming watches of the Grande Maison.

The new Master Grande Tradition Grande Complication embodies Jaeger-LeCoultre’s mastery of astronomical complications in its celestial vault complication, which defines the dial of the watch.

Jaeger-LeCoultre first brought together the technical innovations of its new-generation minute repeaters with an astronomical display in the original Master Grande Tradition Grande Complication of 2010. That watch also introduced the Orbital Flying Tourbillon, integrating it into the mechanism as a regulating device.

As well as turning on its own axis in 60 seconds, the tourbillon makes a complete, anti-clockwise circuit of the dial in one sidereal day. Slightly shorter than a solar day (on which we base civil timekeeping), a sidereal day is based on Earth’s rotation measured relative to the ‘fixed’ stars, which takes precisely 23 h, 56 min and 4.1 seconds. The sidereal day is used by astronomers to follow the apparent movement of the stars across the night sky.

A golden sun-shaped pointer set at the edge of the disc of constellations indicates the date, the month, andthe signs of the Zodiac, as well as the 24-hour scale that is marked on the inner flange of the dial. Civil time is read on the two concentric rings that complete the dial: applied hour indexes on the first ring and minutes on the silvery-white outer ring.

An exceptional movement merits an exceptional habillage and the new Master Grande Tradition Grande Complication brings fresh artistic expression to this marriage of complications. Reaffirming Jaeger-leCoultre’s expertise in design and mastery of artistic crafts, the timepiece is offered in two versions: one marries the warm glow of pink gold to a black dial, while the other combines deep blue tones with the coolness of white gold and the discreet sparkle of baguette-cut diamonds, which are set on the bezel.

A multiple-level dial amplifies the beauty of the celestial theme while also showcasing the orbiting tourbillon. On the deepest level of the dial, a midnight blue or black disc (depending on the model) is decorated with tiny stars. Above it, a delicate filigree forms a dome, its structure echoing the pattern of the constellations marked on the convex celestial disc. The star chart depicts the Northern Hemisphere night sky, as seen from the 46th parallel – the latitude of Jaeger-LeCoultre’s home in the Vallée de Joux.

The new Master Grande Tradition case, introduced in 2019’s two minute repeaters, is a perfect complement to the artistry of the dial and the sophistication of the movement. Comprising more than 80 parts, its convex bezel is complemented by broad bevels on the lugs; the hollowed-out sides of the lugs add dynamic tension, while the repeater slide is tapered to harmonise beautifully with the curving case sides. Different surfaces are microblasted, polished and satin-brushed to maximise the play of light and emphasise the details.

In every sense, the new Master Grande Tradition Grande Complication is testament to Jaeger-LeCoultre’s enduring expertise in chiming watches and its dedication to maintaining the fine balance between a passionate drive to innovate and profound respect for tradition.