CELEBRATE TIME WITH A PERSONALISED ENGRAVING ON YOUR JAEGER-LECOULTRE REVERSO 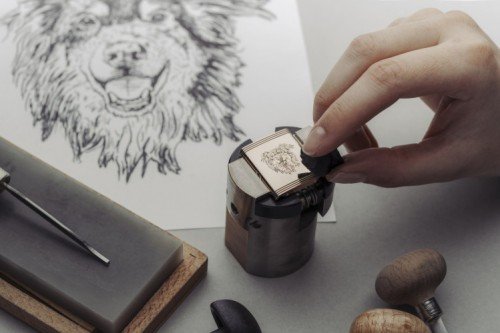 A fine watch does so much more than simply tell the time; it is a personal and intimate object and it symbolises the deep connection between special moments in time and our most treasured memories.

When Jaeger-LeCoultre introduced the Reverso almost 90 years ago, its blank metal flip side was designed purely as a functional solution to the need for polo players to protect the delicate glass of their watches. However, it immediately became a canvas for special messages and artistic expression, decorated with enamel or engravings.

Some would commission engravings for themselves – to mark one of life’s milestones or as a reminder of something deeply meaningful. Others would commission engravings as a gift for someone special in their lives – perhaps a significant date, maybe a message of love. Thanks to the Reverso’s design – unlike any other watch – the decoration could be kept secret or flipped over to be displayed to the world.

Continuing this tradition, three of the Maison’s friends share their stories about how they have personalised their Reverso watches.

A watch enthusiast since he was very young, British actor Nicholas Hoult (The Favourite, X-Men, A Single Man) has enjoyed close links with Jaeger-LeCoultre for the past four years, regularly participating in the Maison’s cinema-related activities. His Reverso, a Reverso Classic Large Small Second in Steel, reflects his relaxed and classical style of dressing and his choice of engraving – his son’s initials – is equally classical, yet deeply personal.

“I engraved the initials HKH as a way to honour my son and keep him close to me every day. Timepieces have a tradition in my family of being passed down between generations. I am excited to pass along this watch to my son one day, “ says Hoult, adding that his interest in watches began through his own father’s fascination with timepieces. Through his choice of engraving, Hoult has created a future heirloom with a deep emotional connection to his family.

Welcomed by Jaeger-LeCoultre as a friend of the Maison at the beginning of 2019, when she attended SIHH for the first time, American actress Amanda Seyfried (Mamma Mia! Les Misérables) often speaks about her beloved dog, Finn. Since she rescued the Australian Shepherd from an animal shelter almost a decade ago, he has played a major part in her life.

For the flip side of her Reverso Classic Medium Thin, she asked Jaeger-LeCoultre’s engravers to reproduce a favourite photograph of Finn. “He’s been my constant companion, unconditional support, and the guiding light in my life,” explains Seyfried. “He’s my forever lucky charm and having his little face against my skin every day will be the perfect reminder of how special our bond is.”

With starring roles in The Flowers of War and Love and Destiny among her credits, Ni Ni is one of China’s most acclaimed young actresses. A friend of Jaeger-LeCoultre since 2018, she has taken an active role off-screen in the Maison’s initiatives to support and preserve the cinematic arts. For her Reverso, Ni Ni has chosen plum blossom as a poignant reminder of her home town – but it could just as easily be seen as an allegory of the actress’s delicate beauty and inner strength.

“When I was a child, many Chinese poems about the elegance and resilience of the plum blossom impressed me a lot. In my hometown, Nanjing, we have the ‘best Plum Blossom Mountain in China’ and Xuanwu Lake, where you can find plum trees blooming vibrantly even in winter snow,” Ni Ni explains. “The choice to include these elements was not only due to the classic beauty of the plum blossom, but also because it’s symbolic of perseverance in the face of adversity.” The cool tone of the steel case of Ni Ni’s Reverso Classic Medium Thin makes a beautiful background for the delicate engraving of the plum blossoms.

Everybody who owns a steel or gold Reverso – whether new or pre-owned – can request an engraving for the reverse side of the case. And, through an online commissioning tool (https://engraving.jaeger-lecoultre.com ), Jaeger-LeCoultre has made the process extremely straightforward, regardless of where in the world an owner may be. Online, the standard options include a choice of initials or dates in a variety of font styles, simple text messages or Zodiac signs, all with the option of adding coloured lacquer to highlight the design. Bespoke designs – based on a photograph, a sketch or even starting with just an idea – can also be commissioned online. The possibilities are as infinite as the skills of the designers and engravers at Jaeger-LeCoultre’s Manufacture.

Many owners may prefer the more intimate experience of commissioning their engraving through a Jaeger-LeCoultre boutique. Especially for bespoke work (as with the engravings commissioned by Ni Ni and Amanda Seyfried) there is great pleasure to be participating in the creation of a unique and intensely personal design, then following the progress of the engraving until the final work of art is revealed.

Whether the engraving is simple or more complex, it always transforms a Reverso from a fine watch into a unique piece – a highly personal reminder of a meaningful story. Some stories deserve to be captured for ever. What is yours?